So Long And Thanks For All The Fish!

One of the sad paradoxes of the environmental movement is the degree to which it tends to ignore or obscure State destruction of natural resources. One chilling example of this was the fairly recent obliteration of the cod stocks off the coast of Newfoundland, Canada – which powerfully illuminates the dangers of allowing the State to (mis)manage natural resources.

These cod stocks were among one of the great natural resources of mankind. When John Cabot first arrived near the shores of Newfoundland 500 years ago, he reported that the cod stocks were so thick that he felt he could actually walk ashore from his ship – and his sailors could simply scoop the fish up in buckets! For generations, tens of thousands of fishermen made their living harvesting this immense natural resource. Free of government intervention, they managed to maintain this resource in a manner that sustained itself for centuries.

All this began to change in the late 1960s. Larger and larger foreign fishing vessels began to ply the waters off Newfoundland. These new factory-freezer trawlers could not only catch up to 200 tons of fish in a single hour (twice the take of a typical 16th-century ship for an entire season), but could be re-crewed and supplied by ocean-going tenders – and had onboard processing plants with automated filleting machines to boot!

By the early 1970s, hundreds of these massive (and often publicly-funded) vessels were plying international waters – effectively strip-mining the sea of fish. (Russia had over 400!) Starting in the late 1960s, the cod catch peaked off Newfoundland at 810,000 tons. As the amount of fish available began to decline, the international fishing vessels moved off to other waters, leaving the Newfoundland fishermen with a still-healthy resource base. So all was not lost.

In 1977, following the United Nations “Law of the Sea Convention”, Canada extended its territorial waters from 12 to 200 miles off shore – effectively kicking foreign fishing vessels away from the cod stocks. Atlantic fishermen were overjoyed. Finally, the Canadian government was coming to aid of the fishermen by forcing foreign vessels offshore! Hallelujah, the resource is now safe!

As we can expect, their joy proved relatively short-lived. Also in 1977, the Government of Canada – through the Department of Fisheries and Oceans (DFO) – took over the management of the fisheries, and quickly and decisively went to work. After getting rid of the foreign fishing fleets, the Canadian government then proceeded to subsidize the building of a deep sea trawler fleet of its very own – and further subsidized the expansion of onshore fish processing plants in Newfoundland. As the new fleet was being constructed, the processing plants lay empty – and so the DFO set up joint fishing ventures with the very same foreign vessels that were supposed to have been kicked outside the 200 mile limit! To ensure continued domestic employment, these foreign vessels were allowed to further pillage the cod stocks, in return for transferring part of their catch to the idle processing plants in Newfoundland.

Why would the government do such a thing? Well, for popularity of course, since selling the future to fatten the present is one thing the government is very good at – but also for the increased taxes that come from a higher level of economic activity.

Now, because so many people had become dependent on government subsidies and programs for their income, a death spiral for the cod industry began. Many local wives, sons and daughters began working in the state-subsidized fish processing plants – and, as the cod stocks began to diminish, families as a whole began to rely more and mo of re on the income of those working in the plants. However, the processing plants could only continue to receive their subsidies if fish kept coming in from offshore – thus there was a strong incentive to fish even more as the cod stocks began to decline.

As family income declined, fishermen began to directly lobby their local and federal governments for increased subsidies. The federal government defined the Total Allowable Catch (TAC) on and, starting in 1981, the Personal Registration System was instituted by the Department of Fisheries and Oceans (DFO) – there was also the Limited Entry Licensing system, which granted fishermen licenses to harvest different species such as crab and lobster. As an unofficial way of controlling numbers, new fishermen were generally classified as ‘part-time’, which meant that they had to go through a fairly lengthy apprenticeship period before getting their full-time licenses. Sadly, however, “part-time” fishermen were only allowed to catch – you guessed it – cod!

Things went rapidly downhill from there. Governments began hurling money at the fishing communities – subsidies were handed out for boats, seasonal unemployment insurance, welfare schemes, alternative employment schemes (one even envisioned that chilly Newfoundland would somehow become the cucumber growing capital of the world through a system of state subsidized greenhouses!) and all such regular ‘instant-gratification’ political and economic idiocies. For instance, in a response to the downturn in the fisheries market in the early 1980s, the Federal government created a crown corporation (Fishery Products International) designed to sell more fish and increase the market. Makes sense, right – if a resource is running out, the best thing to do is to try and sell more of it!

The Total Allowable Catch (TAC) was set by the DFO, supposedly on the advice of its own scientists. However, intense political pressure was brought to bear on those scientists to produce the ‘correct’ (i.e. politically advantageous) numbers. No politician wanted to face the wrath of the fishermen by telling them that they were not allowed to catch as much as they wanted – or felt they needed to survive.

At first, the scientific models just proved faulty – but even after those faults were corrected, politicians simply increased the TAC over and above the recommended levels for the sake of political expediency. After such excessive quotas remained in place throughout the 1980s, the DFO scientists began recommending drastic cuts – over 50% – to the TAC in 1989.

The scientific ‘miscalculations’ were almost incomprehensible. The DFO scientists based their estimations of cod stocks on the volume of commercial catches – without taking into account massively increased technological efficiencies in fish finding. Thus catches remained relatively high, even while cod stocks were in precipitous decline. Also, fishermen were very aware that the more fish they reported catching, the less their Total Allowable Catch would be – and so under-reporting was commonplace. Finally, fishermen not allowed to catch cod but allowed to catch other fish simply dragged their nets along the bottom of the sea and threw away the cod they caught (called ‘bycatch’) – thus not exactly lowering the incidence of cod destruction.

This was all well-known throughout the 1980s – and everyone who tried to raise the red flag and warn about the coming environmental catastrophe was either ignored or repressed. The government-subsidized Kirby Commission studied ‘all aspects of the Newfoundland industry’ in 1983 – with the notable (and regrettable) exception of the fish themselves. If you wanted a sociological analysis of fishing communities, you were in luck. If you wanted to know whether there would be fish in five years, well…

In 1988, the scientific models were updated, and a new survey revealed that most fish stocks were on the edge of collapse. DFO experts recommended that the TAC had to be cut by more than 50% for the fish to have a chance to survive. Politicians merely laughed and, after a massive internal turf war, agreed to cut the TAC by 10%. As the fishermen continued to over-fish, more data poured in confirming that more than 60% of the adult cod had been captured for several years in a row. Nearly $600 million of state subsidies flooded into Newfoundland.

As is so often the case, as the end drew near – as endless fleets of state-subsidized fishing vessels ploughed back and forth over the emptying seas – local fishermen began to realize the Faustian nature of their bargain with the State. Talk began to turn from how to best milk State programs towards how the cod might be saved from the disaster every fisherman knew was coming. They began to descend upon government offices with demands that the TAC be lowered. They talked to the media, protested, marched, wrote petitions – and, as their desperation grew, they began to understand the truth of turning power over to the government. The government had no interest in their long-term futures – politicians just look to the next election; they don’t care about cod; they care about votes. The people of Newfoundland had taken the tax money, given up control over their own lives, their own communities, and their own resources – and now the time had come to pay the bill.

In a final mad panic, the inshore fishermen dug into their own emptying pockets and commissioned their own study on the failing cod stocks – the Alverson Commission – in the mad hope that their government might respond in a rational manner. No suck luck, of course. The politicians just smiled, passed the report to their handlers, and went right back to talking about their deep and abiding love of the people of Newfoundland.

The end came as swiftly as one would expect. After the 1992 fish surveys were released, just over 1% of the 1960s cod stocks remained. On July 2 1992, the then-Canadian Minister of Fisheries and Oceans announced a moratorium on northern cod fishing. It was, of course, presented as a ‘short term’ solution, which has lasted up until the present. Economically, it was a complete catastrophe – 19,000 fishermen and plant workers lost their jobs, and 20,000 other jobs were lost or harmed. These jobs were not evenly distributed geographically. Hundreds of communities – some hundreds of years old – were effectively wiped off the map. 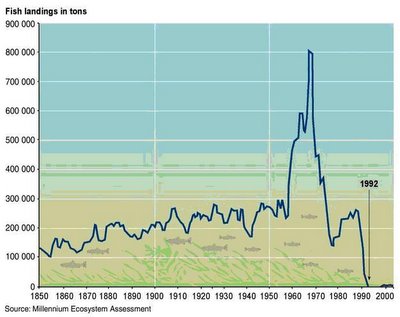 Stefan Molynuex, is the host of Freedomain Radio (www.freedomainradio.com), the most popular philosophy site on the Internet, and a “Top 10” Finalist in the 2007-2010 Podcast Awards.

Sign up for the Freedomain Newsletter to receive previews of upcoming shows, exclusive presentations, invitations to private call in shows and much more!